The LP is such a devastating fast car, no true (safe) evaluation can be made without a proper drive on track and there really is no better circuit for this car than at Spa.

One of the fastest circuits in Europe, Spa gives plenty of opportunity for the LP to properly stretch its legs without fear of social or legal persecution.

Having owned the car for a scarce number of weeks, I’ve already read reports and heard through the grapevine gossip about my car having been heard in all manner of places across London! The right pedal pulls in attention from both appreciating and condemning individuals in equal measure.

After first figuring out how to get to Europe and back again without a passport (another story for another day!), the pleasures and joys of anticipation start to filter through. I have not experienced any better viewpoint from that of the LP. Despite the shared Audi switchgear, it really is a pleasant environment, combining classy chrome components with cross stitched, quilted leather upholstery and dashboard. Coupled with the dynamic, agressive Lamborghini typography everywhere, the intent is not discreet and the business of arriving to your destination in both speed and style is encouraged.

The journey to Spa is not as enjoyable as you would imagine. It’s a combination of French Autoroutes and Belgian ring roads which, during rush hour traffic, is a chore as British number plates are always a fresh target to local police. We were chaperoned in Belgium by a police car for approximately 45 minutes at one point. It makes progress monotonous and frustrating. At the helm of a Lamborghini, however, it could be worse…

On the road, the LP560 monsters progress (away from police escort). Any enthusiastic action is an exercise in restraint. Not only is the 550BHP bewildering, but so is also the noise it makes. Every time you overtake somebody, you are constantly wondering if you have just given the driver of the receding car a triple cardiac arrest. It’s also a car of liberties. Queues matter no more on motorways and junctions are just a simple exercise in arrogance, just putting your nose out allows you to take advantage of everyones caution, making for motorbike-like filtering through busy traffic. I know, I know, it’s so wrong.

Get the right Autobahn though, as we did on entrance to Germany, hit a de-restricted part and nail it. I’m not sure, but I think I saw over 210MPH on the speedo. It’s not the top speed, but the phenomenal rate of acceleration getting there. That 5.2ltr engine is a monster. I suspect that if I were to have more space, that car would continue to accelerate to at least 400MPH.

I had made no preparations for the car and I was slightly nervous that the car was simply not ready for track use. Normally, I would have set the geo and suspension accordingly and ensured at least that the brake fluids were uprated with sufficiently capable brake pads. I had good faith in my tyres though as they were the excellent Pirelli Corsa Systems. Not the magical ‘R’s as we have used consistently on the GT3’s, but good enough all the same. Although most of my fears are unfounded as the car is surprisingly competent off the shelf. More so than my Gen 2 GT3 ever was.

The morning was covered in fog around Spa, which lifted my spirits somewhat as I was looking forward to a damp track to evaluate the off limit handling characteristics of the LP, but the tyres made that very difficult, providing excellent grip on the circuit with expected traction from the 4WD. Nothing other than vulgar, aggressive provocation could put the LP out of line. Aside from some gentle understeer, turn in was accurate and predictable. You can enjoy some serious advantages on the straights with that savage speed and power allowing you to reel in the cars that have an edge over you on the twists.

I’m not going to lie, for pure track use, it’s outclassed by the GT3, even if it could get faster lap times. It lacks that on-limit finesse that defines the Porsches from their Italian counterparts. It is heavy, absurdly thirsty (I was getting 8 MPG) and very very expensive to run on track. It IS a Lamborghini after all.

Very few cars outperformed the Lambo on track. Only a super quick trick Corvette and a few of the champ racers in GT3’s, otherwise it was devastating. But no other car sounded or looked as good, if I may say so :)

However, I did not buy this car as a dedicated track car. For the first time in a long time, I had just as spectacular time out of the track as I did on it. The eGear makes for a great companion after a tiring track day, even if the auto-mode is a little too agricultural. But find that road, no matter how short, that allows you to take advantage of a few manual downshifts and thumps of the accelerator and it all makes perfect sense. As we left Spa to drive to Nurburgring, we set the Sat Nav to ‘avoid motorways’ and ‘shortest route’. This takes you across some of the finest roads Europe has to offer as seen from some of the pictures below. Even if it cost me a new windscreen (£3200) and a new front respray (£1800) that your friend (Glenn) refused to pay for because he has a disorder which protects him from being anything other than in front of the convoy. Now the Lambo is simply unbeatable as it offers power, noise and looks – at absolutely no compromise. 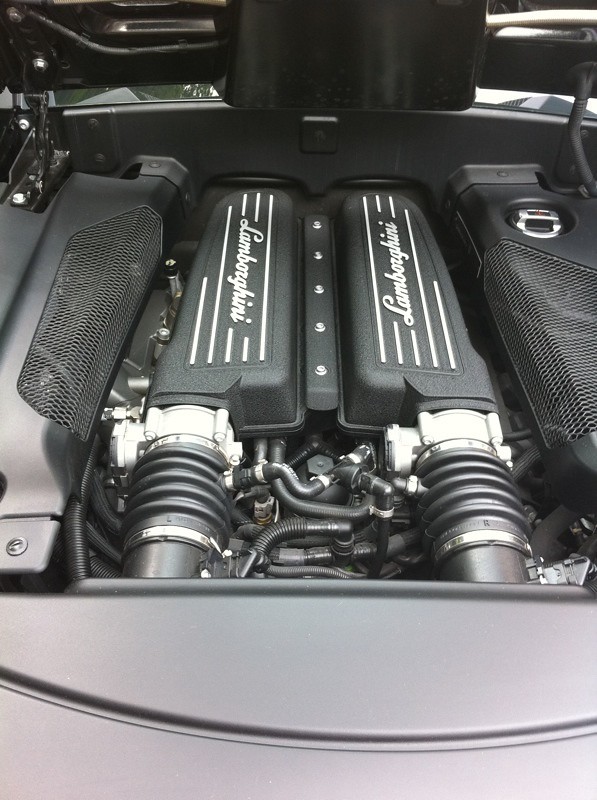 Date with the devil – LP560 bought